The Earth contains about 1.36 billion tons of water.  This water is in constant motion, cycling through the earth’s water circulation system, moving through the oceans, the air, the land, and back again.

The great majority of Earth’s water is contained in the oceans, seas, and bays with 96.5% and totals about 321,000,000 cubic miles.  Only about 2.5% of the earth is freshwater.   Over two-thirds of Earth’s freshwater is locked up in icecaps and glaciers, totaling about 5,773,000 cubic miles in volume. The majority of the remaining freshwater is found in the world’s groundwater at 30.1%.

This infographic from the United Nations Environmental Programme also adapted from Shiklomanov’s work shows the global distribution of freshwater sources from glaciers and ice caps, rivers and estuaries, and groundwater. 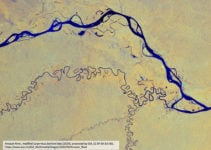 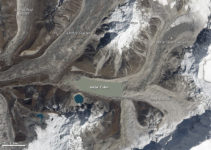