Scientists in Australia have discovered that mangrove ecosystems in Queensland are dying at rates that have never been seen before. The loss of mangroves there ­ along the coast of the Coral Sea ­ is occurring at the same time as a loss of coral reefs there. Another clue to the source of these disappearances is the ongoing drought that the region is experiencing. As reported in the Sydney Morning Herald, the Australian Mangrove and Saltmarsh Network spokesperson Norm Duke says that this level of mangrove and coral loss would be expected to be caused by sudden, major events like oil spills or tsunamis. It is less obvious that a slower and longer lasting drought would have this effect.

The changes our planet is undergoing are expected to produce climates that move more toward the extreme ­ here, hotter and more dry seasons in Australia ­ as well as extreme weather events like hurricanes and tsunamis for which the frequency and intensity both increase. The ecosystem services that mangroves offer are remarkable, and among the most important of any species to its ecosystem. They filter the water that enters the sea, provide habitats, slow erosion, and their importance in carbon sequestration is well­known. But mangroves are particularly susceptible to climate change and rising sea levels, and their death creates a positive feedback loop when the stored carbon is released and only contributes further to climate change. In Queensland, mangroves are being lost at unprecedented rates while under state protection. Similarly, mangroves offer a buffer against tsunamis and tropical storms. If their loss creates a positive feedback loop and a snowball effect, more frequent and intense natural disaster events will have a greater impact on shorelines where the mangroves are no longer acting as a defense. Mangrove ecosystems are crucially important in our fight against climate change, and must be seriously valued and protected now and into the future.

Googly-Eyed Squid is a Ferly Discovery 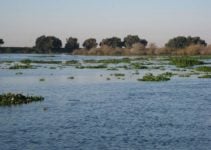